After prices and rates dropped, regulators and lenders made it harder for borrowers to get loans

Sean Dobson wanted to start a mortgage bank four years ago to serve borrowers with middling credit or irregular income. He eventually decided that growing regulatory hurdles and other costs would erase his returns.

Instead, he purchased thousands of homes in states from Texas to Indiana and now rents them to people who might have been his borrowers.

U.S. consumers and businesses have enjoyed ultralow borrowing costs since the financial crisis because the Federal Reserve pinned interest rates near zero. At the same time, regulators and lenders intent on fortifying the financial system have clamped down on risk-taking, making it harder for many borrowers to get loans.

The result is that lending for housing, a pillar of the U.S. economy, has bifurcated. Well-off households and home builders have their choice of loans, while many others without solid credit or stable incomes are locked out.

That dynamic is one reason the U.S. has seen such anemic economic growth despite aggressive efforts to encourage investment. Money has been cheaper and more abundant than ever, but—for some—much harder to get.

The result is that lending for housing, a pillar of the U.S. economy, has bifurcated. Well-off households and home builders have their choice of loans, while many others without solid credit or stable incomes are locked out.That dynamic is one reason the U.S. has seen such anemic economic growth despite aggressive efforts to encourage investment. Money has been cheaper and more abundant than ever, but—for some—much harder to get. 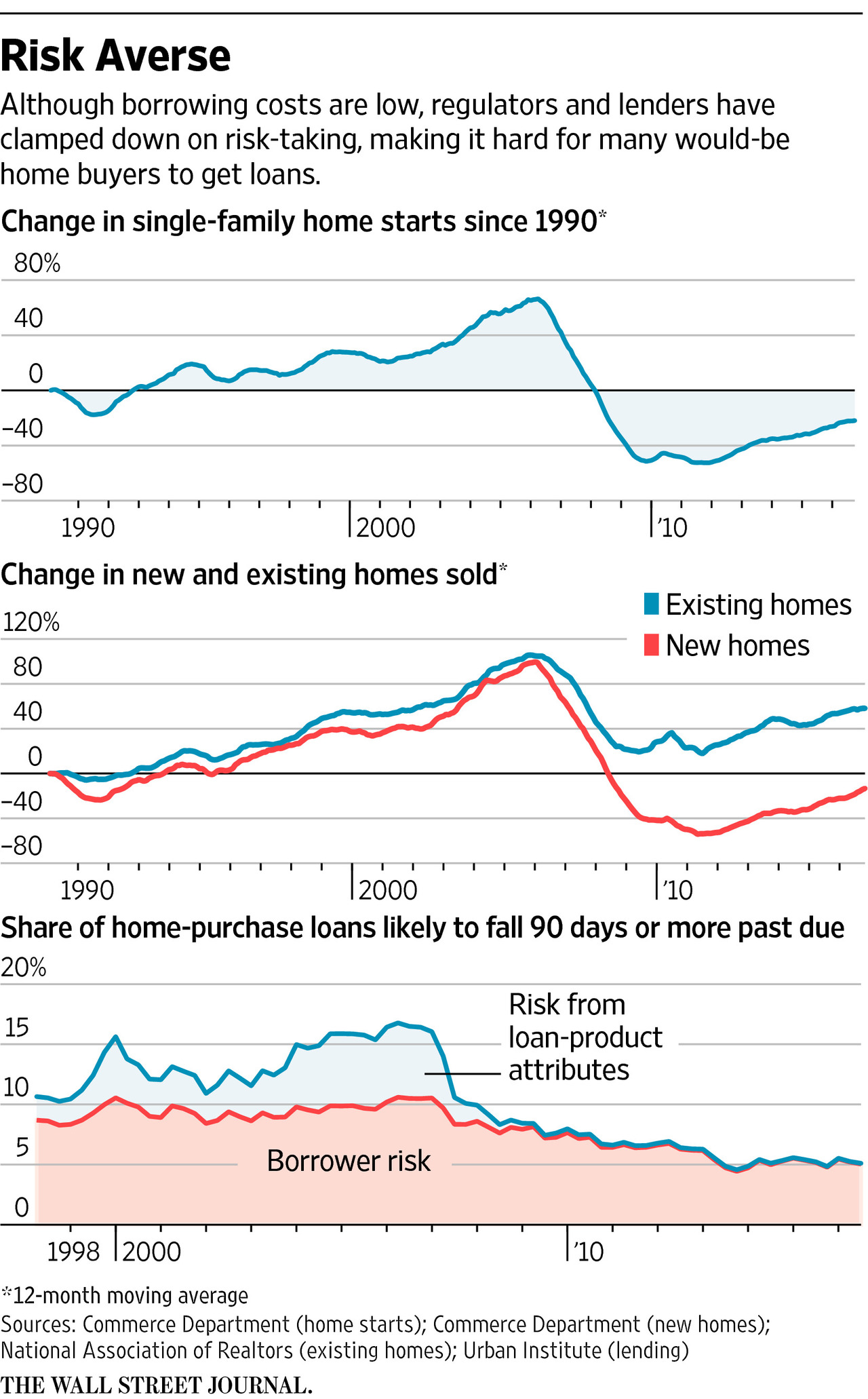 Policy makers have focused on “lowering the cost of capital instead of increasing the availability of credit,” says Mr. Dobson, chief executive of Amherst Holdings, an investment firm in Austin, Texas.

Home prices and sales have risen since 2011, with prices nationally surpassing their 2006 highs, before adjusting for inflation. But new construction collapsed so drastically during the bust that even today it has returned only to levels normally seen in recessions. Sales of new homes are running about 30% below the average between 1983 and 2007 and are lower than every one of those years except for the recession of 1990-91.

“We are at a point when housing should be going gangbusters. It’s not going anywhere,” says Lewis Ranieri, a financier who pioneered the market for mortgage-backed securities in the 1980s. “The people with access to credit have become rich, and the people without access don’t even have a chance to climb up the ladder.”

Homes are generally the biggest purchase Americans make, and housing dollars ripple through the economy by triggering spending on appliances, furniture and landscaping.

Single-family home construction accounted for 2% of gross domestic product, on average, during the 1990s. It has averaged just 1% of GDP since the recession ended in 2009.

Lending for home purchases hit its highest level since 2007 during the April-to-June quarter, but almost all the growth has come from borrowers with credit scores of at least 700. Credit scores run between 300 and 850, with scores below 620 considered subprime. Borrowers with scores below 700 accounted for just 15% of originations, the lowest share of such lending since at least 2000, according to data provider Black Knight Financial Services.

Regulators have defended the spate of rules implemented after the crisis while acknowledging the strain. “No economic sector that precipitates a global financial meltdown could possibly expect to escape far-reaching reforms,” said Richard Cordray, director of the Consumer Financial Protection Bureau, in a speech to mortgage bankers in October. Nevertheless, he added, “the market is not yet supporting access to credit for the full spectrum of creditworthy borrowers.”

Analysts at Pacific Investment Management Co. estimate between one million and 1.4 million Americans who would have been eligible for a mortgage in 2002, before the loosening of lending standards that caused the subprime crisis, couldn’t get a mortgage today.

The bifurcation has made the banking system and the economy less susceptible to the kind of losses that triggered the 2008 financial crisis, but also shows how policy makers retreated from a bipartisan push of homeownership.

Banks would rather extend more credit to large, established firms than make lots of smaller loans to mom-and-pop builders, many of which lost money during the downturn, says Charles Schetter, chief executive of Smith Douglas Homes Inc., a large, privately held builder in Atlanta.

“For the first time, the burden of regulation is setting up a threshold of scale,” says Mr. Schetter, whose company will sell 700 homes this year. He started out in the industry building homes with his father, “when anyone with a hammer, a pickup truck and access to local tradesmen” could start a company, which he says would be difficult today.

Consolidation in the home building and banking industries predated the financial crisis but accelerated during the downturn. Banks with more than $100 billion in assets held around two-thirds of construction loans in 2016, up from less than half during the housing bubble and less than one-third in 2000, according to the Mortgage Bankers Association.

Suppliers and vendors throughout the housing ecosystem were left reeling from the crash, and builders say their challenges finding plumbers, electricians and house framers has begun to limit their ability to build homes.

Jim Ellenburg started his own flooring supply and installation company in 2009 after he was laid off from a firm that closed when builders couldn’t pay their bills. He couldn’t get a loan to start the company, so he used his credit cards. Now that his company has a solid record—he expects $90 million in sales this year in three states—banks are eager to lend.

“That’s part of the problem: You can’t get credit until you can demonstrate you don’t need it,” says Mr. Ellenburg, owner of Cartersville Flooring Center in Cartersville, Ga.

With home prices nationally now above their highs of last decade, investors who took huge risks buying tens of thousands of homes as the market hit bottom are reaping the benefits. Some of their renters are former owners who couldn’t pay their mortgages after the bust and weren’t able to buy again when homes became much cheaper because they couldn’t meet lenders’ tightened requirements.

Mr. Dobson’s rental-home firm, Main Street Renewal, rents 11,000 homes in 18 states, primarily in the South and Midwest. “Unless something changes dramatically in Washington, this is the way a lot of people are going to be in their first home,” says Mr. Dobson, who is still tinkering with ways to start a mortgage bank.

On a recent Saturday afternoon, Margaret Wooten of the Chicago Urban League counseled renters at a homebuying fair on the basics of getting a loan in today’s more stringent environment.

On a packed bus touring foreclosed properties about to hit the market on Chicago’s South Side, Ms. Wooten explained how banks’ insistence on using tax returns to verify incomes—put in place to satisfy the new ability-to-repay regulations—had created bigger hurdles for small-business owners and the self-employed. They sometimes legally write off business expenses to lower their taxable income but then can have trouble proving their higher take-home pay to lenders.

“No, you didn’t have to pay Uncle Sam, but you’re not going to get that home, either,” she told attendees. Ms. Wooten cautioned against going out to buy furniture or a new car after getting approved to buy a home.

“Do not touch anything after you’ve been approved,” she said. “Leave your credit as it is.”

By some measures, mortgage standards aren’t any tighter today than they were in the early 1990s. But demographic changes, including more households delaying marriage and a higher share of younger households with less inherited wealth, suggest that, when combined with more-stringent credit rules, a homeownership rate below the historical level of 64% “is absolutely here to stay,” says Laurie Goodman of the Urban Institute think tank.

“I’ve sat through four years of home-buyer classes where people know they are missing out on the deal of a lifetime and can’t get the credit to compete for it,” says Glenn Kelman, chief executive of Redfin, a real-estate brokerage that operates in 37 states.

Policy makers have struggled for decades to find the right lending balance. Beginning in the 1970s, regulators tried to end a discriminatory practice known as “redlining,” in which banks avoided predominantly African-American neighborhoods.

By the late 1990s, Wall Street rushed into the subprime-mortgage business, long dominated by local niche lenders, transforming pools of those loans into highly rated securities. When the Fed started raising rates in 2004, lenders lowered standards to keep loan volumes from falling.

“No one thought about affordability or sustainability,” says Ms. Wooten, the Chicago housing counselor. “The only thing they thought was, ‘Everybody can be a homeowner.’ That was crazy.”

When property values fell in 2007, the riskiest loans defaulted, credit tightened and the economy ultimately fell into a recession.

Congress responded in 2010 by passing the Dodd-Frank Act, which created the new Consumer Financial Protection Bureau, and asked it and other regulators to flesh out several new sets of rules, including requiring lenders to ensure borrowers have the ability to repay loans.

The government took control of mortgage giants Fannie Mae and Freddie Mac, which together with agencies such as the Federal Housing Administration guaranteed most new mortgages. Fannie and Freddie increased fees for riskier borrowers, widening the gap between mortgage rates available to borrowers with good and weak credit.

By late 2011, the Obama administration had grown worried about the cumulative effect of the new rules and ultimately prevailed on regulators to back off some of the most stringent proposals.

“There was a lot of concern that steps intended to protect the market would end up locking people out,” says James Parrott, a former White House official involved in those efforts who is now a mortgage-industry consultant.

Lenders have been reluctant to extend credit to the limits of what government programs allow because of concerns over lawsuits if loans ultimately default, and because the costs of managing delinquent mortgages have soared.

“If we had our druthers, we would never service a defaulted mortgage again,” said J.P. Morgan Chase & Co. Chief Executive James Dimon in a shareholder letter earlier this year. “We do not want be in the business of foreclosure because it is exceedingly painful for our customers…and our reputation.”

J.P. Morgan cut its mortgage offerings to 15, from 37, and said it had “dramatically reduced” its participation in low-down-payment lending through the FHA. “It is simply too costly and too risky to originate these kinds of mortgages,” said Mr. Dimon.